Vehicle crashworthiness describes the ability of a body-in-white to absorb energy through deformation. This energy dissipation enables protection of the occupants or protection of critical components such as the fuel tank or high voltage batteries.

Accident research has shown that fire, caused by fuel spillage, is one of the biggest safety issues during real-world rear-end collisions. Fuel spillage is a result of deformation of the fuel tank. Consequently, the crashworthiness of a vehicle with respect to fuel tanks is often assessed through laboratory rear-end impact events. One such fuel system integrity test for rear impact is specified by NHTSA (National Highway Traffic Safety Administration) in Federal Motor Vehicle Safety Standard 301 (NHSTA 2014). Here, this legal requirement for fuel system integrity is used to guide vehicle structural design.

The goal is the minimization of intrusion caused by the impact barrier and, as a consequence, minimization of the risk of fuel spillage from the tank. To achieve this, several structural components, such as rear side rail or rear axle, have to absorb energy through deformation. It is also necessary to identify the contribution of each component towards the overall vehicle crash function. Once the contribution of each component has been identified, the components’ functional requirements can be decoupled. Decoupling means that a variation in one component does not require modifications of other components. If a component is decoupled from the others, it can be designed and developed independently. An interval in which a design parameter is allowed to vary, under condition that other variables do not need to be changed to fulfill the global crash performance goal, is called an orthogonal solution space.

The orthogonal feasible design intervals of all components are a sub-space of the total solution space (Fender 2013). If a parameter of a component varies in its orthogonal feasible interval, the performance of other components is not affected. For simplicity’s sake, we will refer to an orthogonal feasible design interval as “corridor” in the following. The name stems from the shape of the subspace if the force intervals are plotted over their deformation values and interpolations between the points of the upper and lower boundary are used. The concept was developed by Zimmermann and Hoessle(Zimmermann & von Hoessle, 2013). 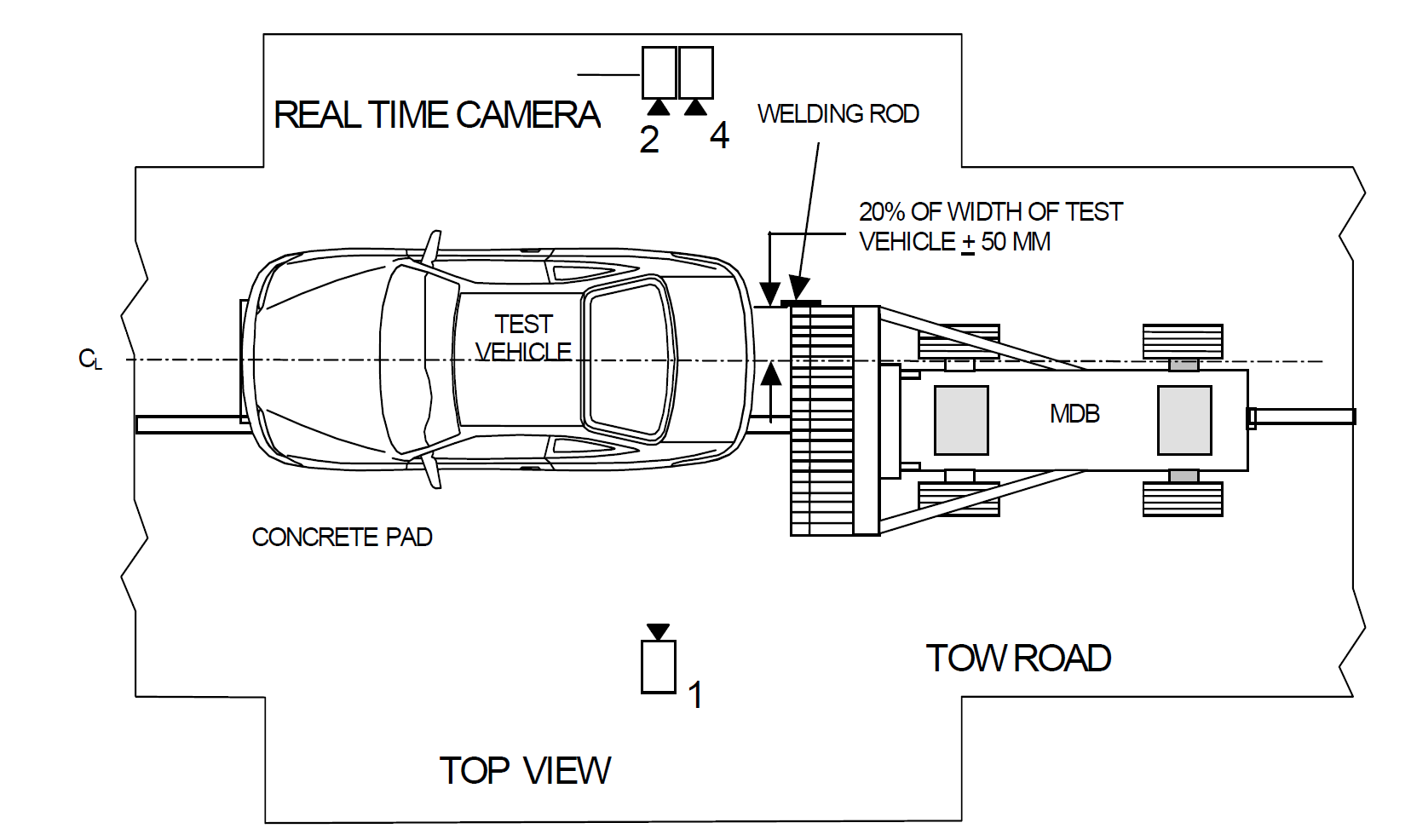 Full-vehicle finite element models have a large number of degrees of freedom. This makes them ill-suited for numerical optimization because they are computational expensive, which severely limits the number of function evaluations. The difficulty can be alleviated through the use of physical surrogate models, which capture only the relevant mechanisms, associated with a smaller number of degrees of freedom. The components are substituted as springs in the model. Their stiffness can be characterized by the force-deformation response obtained from the FE reference model. Therefore, a good method for measuring the force-deformation response of the components is important for building a good surrogate model. Several measurement techniques are studied in the project. They are summarized in the following.

Force can be directly measured from FE reference model. In Abaqus, integrated force on a cross section can be directly measured through a cutting surface. It should be noted that at a high deformation, some elements may be deformed such that its folds make contact with each other. Forces acting in these folds are not measured correctly by the section forces.

The force acting on a structure can also be derived from the change of internal energy over deformation.

The internal energy can be measured directly from Abaqus. The deformation of components need to be measured by some other methods, such as deformation through reference points or connectors.

There are several ways to measure the deformation of a component.

The easiest method is to measure directly from the post-processing software like, Animator. Nevertheless, the output file .a3db used for Animator usually only contains information with a coarse time step. With a coarse time step, the derivation of deformation over time generates too much noise and is not accurate. For this reason, this method cannot calculate correct force-displacement curves. Therefore, some other measurement techniques should be used.

}
are positioned relative to
{

A mass must be added to the node on top of each pyramid to avoid flying nodes phenomenon. The three nodes on the rigid triangular elements are tied to the elements on the structure. In an automobile FE model, the components are normally close to each other. The aim of the connector beam is to measure the deformation of one component. If the one node of rigid triangular element are tied to the elements on a different component, due to different deformation pattern of each component, the triangular elastic element may have too much deformation and the simulation may stop. The stopping mechanism may help users avoid to measure the deformation between points on two different components.

The procedure of corridors’ calculation is illustrated in Figure 3. Initially, a crash simulation with full vehicle Finite Element Model (FEM) is performed. By measuring the energy absorbed by the components and their deformations, the functional behavior can be described as force-deformation curves. This information is then used to identify load paths and the important crash related components. Five loads paths are extracted after the energy evaluation of components in the model. The load paths are shown in Figure 4. Given the force-deformation curves of each component as the reference of the method, the corridor can be calculated. The result in shown in Figure 5. 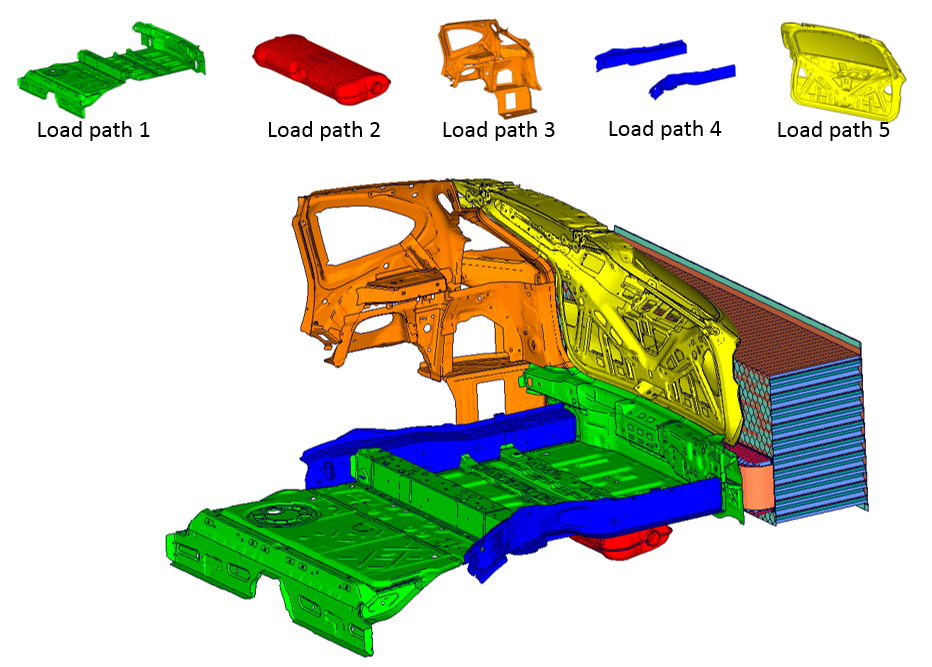 This significant increase of force for the bumper in the last deformation phase may be due to the shortcomings of the energy method used here. The bumper cannot continue to deform in barrier moving direction (x direction) in the last phase, whereas the deformation energy is still increasing due to deformation of bumper in the other direction, namely y and z direction. This might explain the increase in the force-deformation curve and would warrant further study into the correct way of measuring deformation with additional rotation. 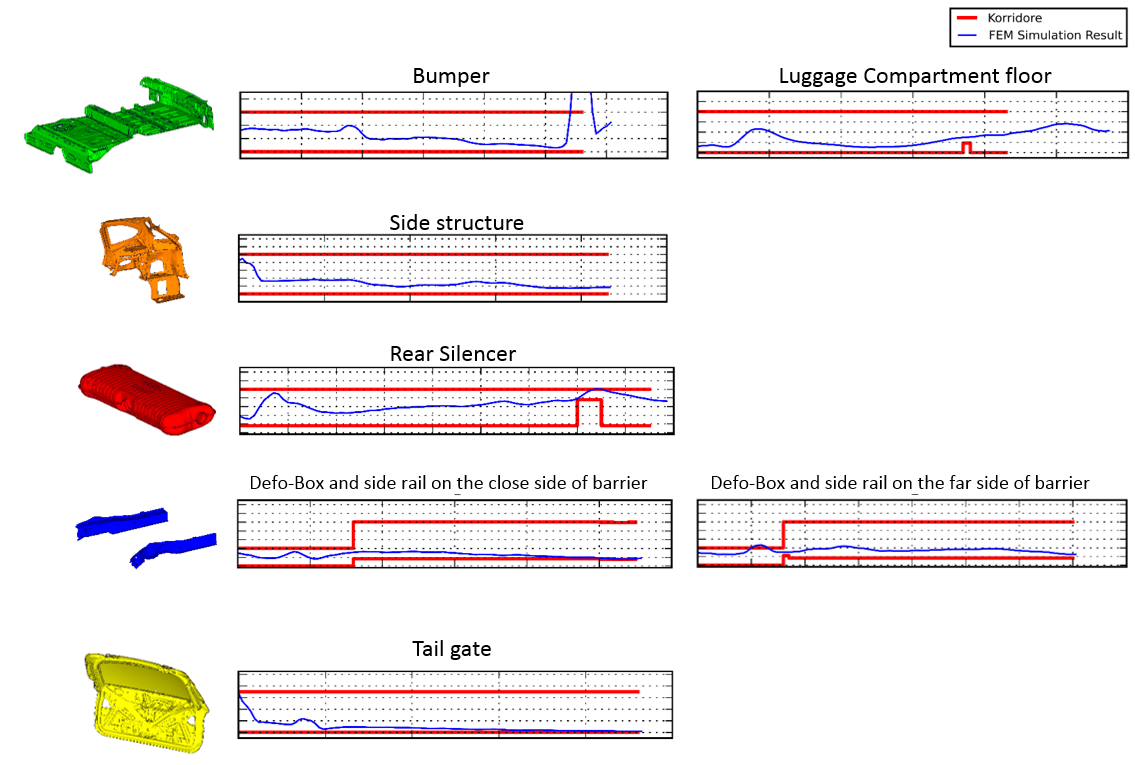 Parameter study of barrier position based on FE Simulation

According to the test regulation, the position of the barrier has a tolerance in each direction of 50mm. The height of vehicles are changed slightly due to different vehicles’ weight. It is interesting to know what effects of the position of the barrier on the final test results are. After finishing the calculation of corridors for a vehicle, parameter study of barrier position is conducted based on FE simulations. The barrier is moved up, down, left, right for 50mm and the corresponding simulations were performed. The results are shown in Figure 6. The black lines indicate the corridors’ bounds calculated from the original barrier configuration. It is shown that the simulation results are sensitive to the vertical change of barrier positions and insensitive to the horizontal change of the barrier positions. When the barrier is moved down, the rear silence has a high possibility to slide around the bumper of the barrier and hits the main block of the barrier. This causes bouncing back effect of the rear silencer. Figure 7 indicates the deformation of rear silence at the different points. During the bounding back phase, the energy absorbed by the rear silence still increases while the deformation of rear silence decreases. This leads to a significate increase of the force values calculated by the energy method. It is suggested, at the later work, to calculate the force-deformation curves of the rear silence after the bouncing effect phase so that the significate increase of the force values can be avoided. In addition, it is recommended to build a better simplified model of barrier to consider the position changes of rear silence. 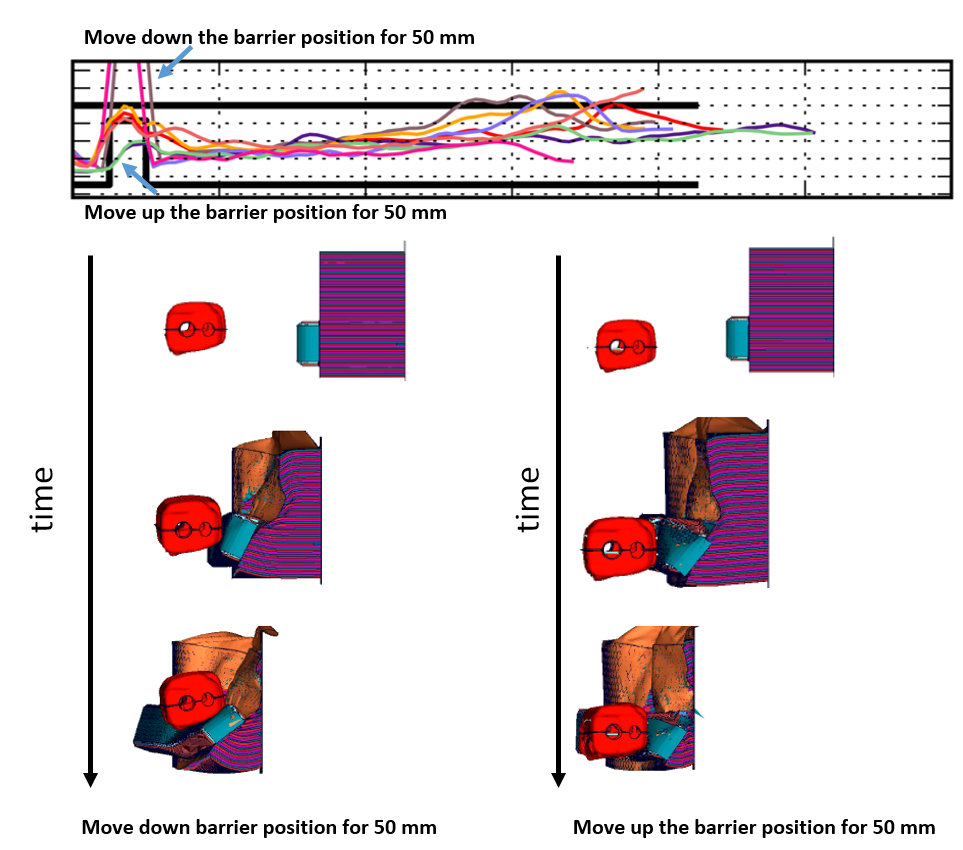 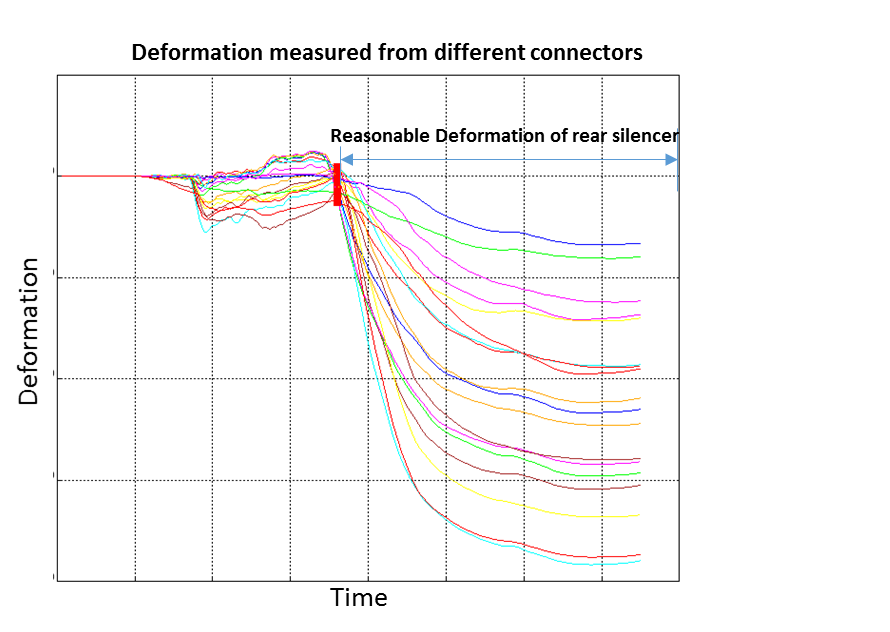 Figure 7. A remedy for increasing the robustness of measurement

By defining corridors for the relevant crash components the necessary crash performance for each component can be decoupled. This, in return, allows multiple suppliers to simultaneously optimize their respective components for all the necessary functions while meeting the necessary crash requirements. The crash performance of each component is achieved if the force-deformation curve fulfills the corridor requirement. It enables vehicle OEMs to develop components separately in different departments while still meeting complex overall design goals for the full vehicle.

Up to now, corridors are only calculated for one vehicle under one rear crash simulation case. Corridors for a group of vehicles which have some common components should also be calculated in future work. In addition, it is also recommended to do shape and thickness optimization of a component such that its force–deformation curve is in the middle of the corridor.

Robustness plays important roles in the vehicle design. A robust design indicates that the force-deformation curve of a component stays in the middle of the corridor. To increase the robustness, a better measurement method should be implemented and a robust structure design is required. The structure should be designed to be insensitive to the small changes of variation of test parameters. In addition, a wider corridor can be calculated on purpose for an unstable design of a component at the cost of smearer corridors for the other components.