Iason Papaioannou did his honours project at SOFiSTiK AG, Oberschleißheim.

Within this project a number of reliability analysis methods were investigated in the context of performing the reliability analysis of real structures, designed by the finite element (FE) method. The reliability methods in question include approximation methods, such as the well-known FORM (First Order Reliability Method) and simulation approaches such as the Monte Carlo method and the Directional Sampling technique. These methods were coded to a FORTRAN 95 program, which was coupled with the commercial FE-program SOFiSTiK.

In order to perform the reliability analysis of a structure, the failure criterion is expressed using a performance function, defined with respect to a number of structural components which are subject to an uncertain behavior (e.g. uncertainties in loading, material properties). The zero-isosurface of the performance function is called limit state function and divides the space of the random structural components (also called random variables) to a safe and a failure region. The limit state function is being evaluated several times during the reliability analysis, by modifying the structural properties and calling the SOFiSTiK FE-solver. Furthermore, a reliability index is computed which represents the probability that the performance criterion is satisfied throughout the lifetime of the structure. The corresponding complementary probability is called probability of failure. In addition, the influence coefficients, representing the sensitivity of the performance function with respect to the random variables, are evaluated. 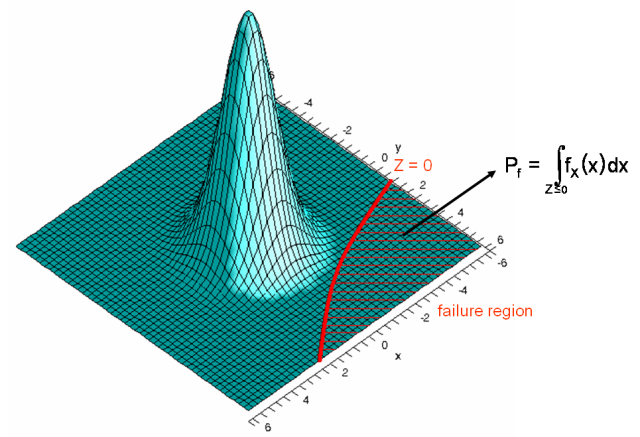 Probability of failure computed by integrating the probability density function on the failure region defined by the limit state function Z = 0, in a problem with two random variables.