In rail industry head pressure waves around high-speed trains can be problematic as they generate noises. In the case of a train entering a tunnel this problem becomes critical. The compressed bow wave propagates at the speed of sound and steepens inside the tunnel. The rate and level of the steepening highly depend on the tunnel interior and it strongly influences the sound emission at the exit of the tunnel. In this project CFD simulations of the head pressure waves around a high-speed train were conducted in OpenFOAM, and the results are analyzed and compared with benchmarks from previous studies using ANSYS-CFX. There are several stages in this project. First, mesh generations with OpenFOAM mesh generators are investigated. Second, the capability of different Navier-Stokes solvers is investigated. Finally the simulation results are analyzed and compared to those from ANSYS-CFX.

Fully developed pressure and velocity fields around the train

Among many mesh generators in OpenFOAM, SnappyHexMesh is the most proper one for this study. Different refinement levels can be selected to resolve down to the turbulent Komogorov scales and the thickness of the viscous sub-layer close to the geometry surface, such that the Law of the Wall can be represented. In the regions far away from the turbulent vortices and the geometry boundaries, coarse grids can be selected to save computational power. In turbulent problems with a large computational domain, depending on which simulation strategy is applied, i.e., Direct Numerical Simulation (DNS), Reynolds Averaged Navier-Stokes (RANS) or Large Eddy Simulation (LES), the determination of the grid resolution is critical. This feature in the package allows the user to optimize and balance result accuracy and computational power. Another advantage of applying snappyHexMesh is that at non-orthogonal surfaces, the mesh becomes in the shape of tetras and the edges of the meshes do not cut the surface of the geometry, which avoids the grids from encircling both geometry and fluid. This improves accuracy in calculating quantities such as flux, especially if the Immersed Boundary Method (IBM) is applied.

Meshes of the computational domain and the train generated by snappyHexMesh

In this project, examples of investigated solvers in OpenFOAM are simpleFOAM, rhoSimpleFoam and rhoPisoFoam. In simpleFOAM the time derivative in the Navier-Stokes equations is omitted and the flow is considered as incompressible. The resulting outputs provide a fast convergent observation to an incompressible steady-state overview. Outputs from rhoSimpleFoam provide steady-state compressible flow results. Both solvers might be applied in RANS simulations, but are improper for DNS and LES. RhoPisoFoam provides transient compressible results, which is the most proper solver for DNS and LES. The following figure implies that the results from OpenFOAM and ANSYS-CFX in steady and transient flows are very close to each other, and OpenFOAM provides good results in many simulations in this project. Note that when considering a train entering a tunnel, moving grids must be applied and trasient flow must be considered. Concerning that fact that the ratio between the scale of a tunnel and turbulent aero Komogorov scales is too large, DNS consumes too much computational resources and LES will be considered here. RhoPisoFOAM together with moving grids is a good conbination for this case in further studies. 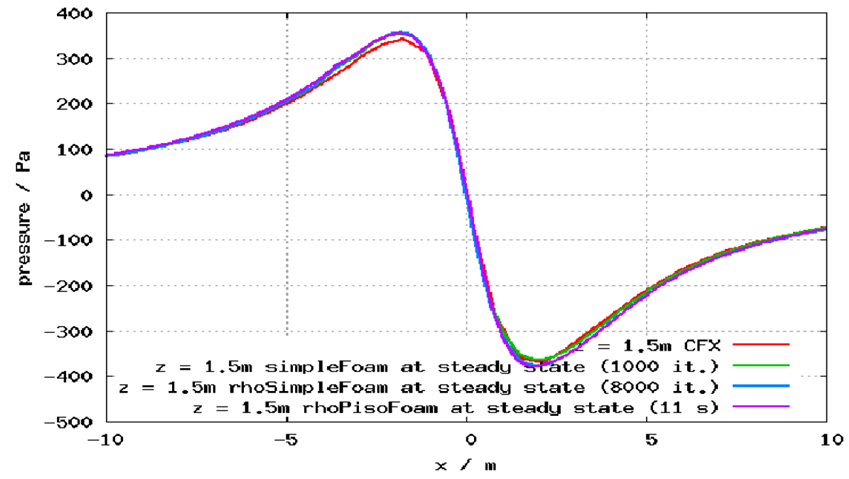 Comparison of head pressure wave around the train by different solvers