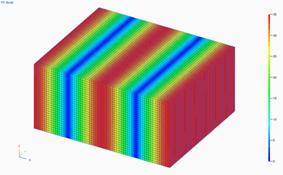 Acoustic pressure distribution at resonance
in a rectangular room

Yum Ji Chan did his honours project at the chair of Structural Dynamics and Müller-BBM GmbH.

In solving room acoustics problems, the walls around a room are usually assumed to be rigid. However, this assumption no longer holds at low frequencies, thus the frequency response at that region depends on the walls and fixtures attached to them. As a result, the fluid-solid coupling effect has to be considered.

The problem is dealt numerically with the finite element method. The solid and fluid elements are formulated according to Hamilton’s principle and wave equations respectively, using acoustic pressure as the variable in the room. System matrices are found to be asymmetric in these systems.

Modal analysis is performed and a number of methods are applied to reduce subsequent computational effort. Modal truncation reduces the sizes of matrices, and the component mode synthesis (CMS) is used to reduce the effort of reformulation due to local design changes. To compensate the effects of the component mode synthesis and modal truncation, attachment modes and the mode augmentation method are implemented respectively. By comparing the CMS schemes, the best results are yielded by using the free interface eigenmodes with the attachment modes.

The algorithm is applied on several numerical models. It shows that the behaviour of a coupled system is not exactly the same as the behaviours of components. In terms of room acoustics, the reverberation time in a room depends on the structures attached to the room heavily.